Economy defined at the most simplistic of terms is the production and consumption of goods and services. In a healthy economy, there is a constant flow of these goods and services, and everyone benefits. In other words, as the popular idiom goes, money makes the world go round. But as Paul Van Der Merwe, author, engineer and Guinness World Record holder reminds us:

"Money [may] make the world go round, however, happiness greases the axle. Without this lubricant, life will seize."

At Online Trading Academy, we have taken this idea to a whole new level with what we refer to as Duckonomy, or Pass the Duckie. The goal of Duckonomy is to take a moment out of your day to express your appreciation to a work colleague for a job well done and/or show how much you appreciate them. In other words, when we Pass the Duckie, we are taking time to grease the axle.

You may be asking yourself, "Why ducks?" We have chosen little yellow rubber ducks not only for fun and convenience, but they are actually symbolic of the Mandarin duck. In both China and Japan, the beautiful birds--whether displayed as an image on a wall or little figurines on one's shelf--are used in feng shui and represent our core value--love--for they stay with their partners for life. They are also used as a symbol of happiness, to help release blockages and support one's life journey.

It is important to point out, for Duckonomy to truly be impactful, the goal is not to collect the ducks and display them on our desks as in feng shui. Instead, the idea is to keep them moving from one co-worker to another. In this way, like a healthy economy, love and happiness spread throughout the company and everyone benefits.

For those receiving the duck:

It’s that easy. When done in this manner, not only will one little duck have a HUGE impact on someone’s life, the love and happiness will spread throughout the company making an impact on each other, our students, our franchises and beyond. 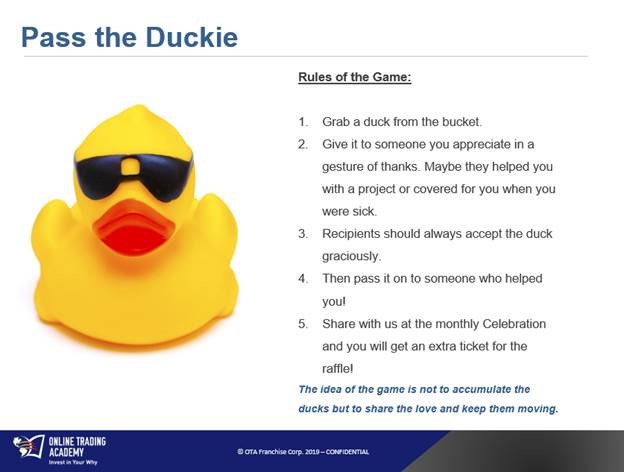